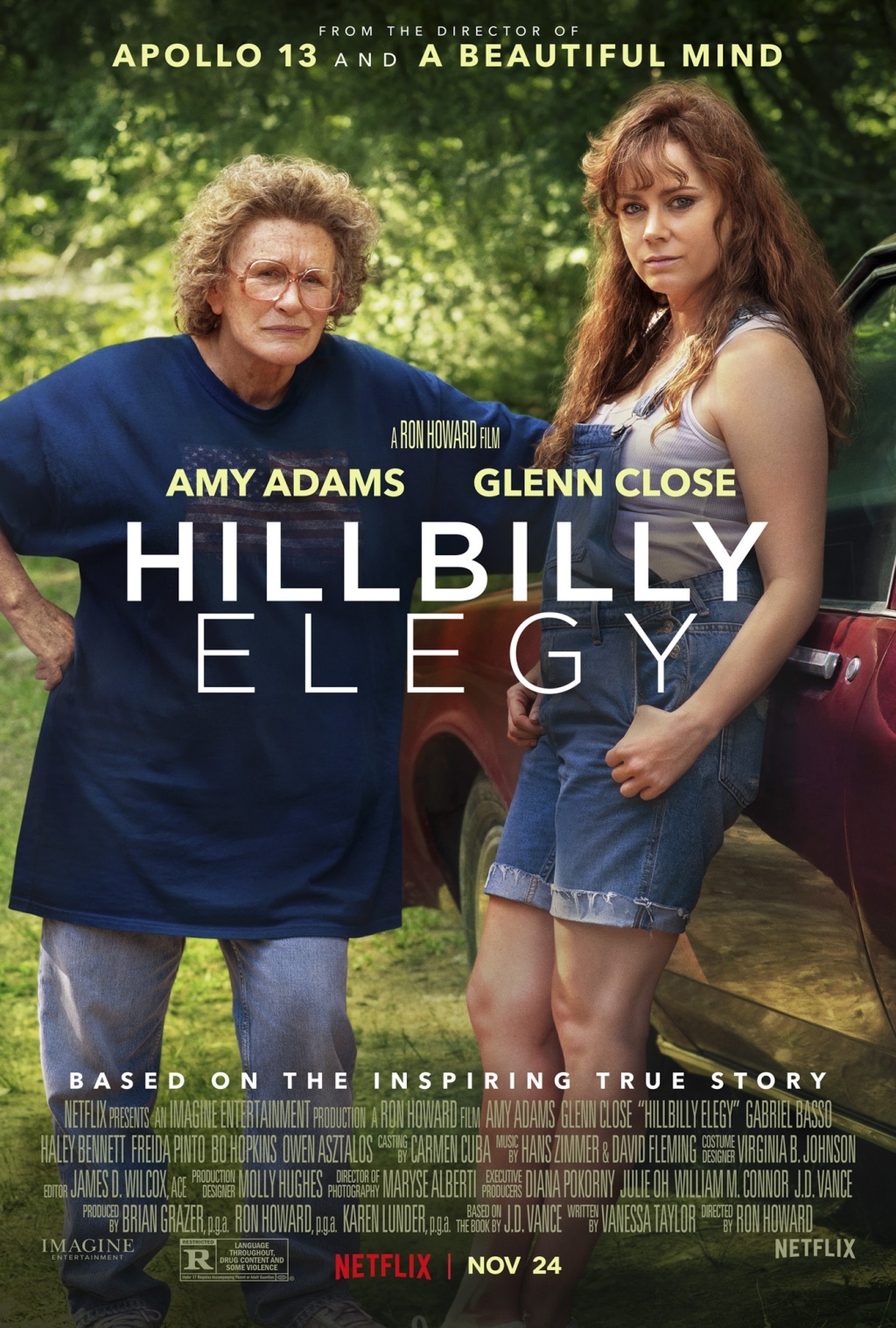 The Stream: Too much time spent with the main character, who is the least interesting in the family.

The Big Screen: Glenn Close, in full wig and make-up, gives it her all.

The Final Bill: What should be an emotional story feels pretty generic.

In a non-pandemic year, late-November/early December would be the sweet spot for releasing films with their eyes on that prize, the Academy Awards. Although theaters are generally still closed, Netflix’s prestige picks are coming out weekly, even though the “awards season” has been extended into April. Last week, Ron Howard’s Hillbilly Elegy premiered with mixed advance buzz and the Oscar hopes of a duo of “overdue,” multi-nominated actresses, Amy Adams and Glenn Close, in tow. Award worthiness is subjective – here’s how I see it.

Based on the memoir by J.D. Vance, Hillbilly Elegy tells the story of J.D., a Yale law student, who is in the middle of interviews for summer associate positions, when he receives word that his mother has overdosed on heroin. J.D. has to go home to his family in Ohio in order to take care of his mother. Through flashbacks on his journey home, we see how J.D. got from his meager beginnings, enduring abuse and his mother’s drug addiction to Yale with the fierce, no nonsense support of his grandmother. The perspective of people in Appalachia is not a typical one depicted in films, but family drama can be universal as many people in urban, suburban and rural areas endure hardships, lack of opportunity, addiction and abuse. There is also love, sacrifice and support that fill families across the board. While this story is specific to a people in a specific place and time in America, it feels pretty generic – disappointingly so.

Ron Howard does not do anything particularly interesting in directing this film. The only exceptions are the two sequences where we see how this Appalachian area has changed and decayed over the decades. Otherwise, Howard lets the emotions of the story drive the action. And, the emotions are very high.

Amy Adams plays J.D.’s mother, Bev. She’s mired in drug addiction. She’s abusive. She’s impulsive with men and clearly has trauma and mental health issues. Adams chews all of the scenery. She plays every angle to the hilt, which becomes a bit much to take.

The other pillar in J.D.’s life is Mamaw as played by Glenn Close. Close has the wig and make-up to transform her into the chain-smoking, Terminator loving matriarch. Close moves and speaks in a way that helps her embody the character and attempt to make the “hillwoman” more than a caricature. Close is more successful in her portrayal than Adams as she strikes the right tones and gets the inspiring, emotional touches needed to ground the movie. Unfortunately for both Adams and Close, their scene partners who play the teenage and adult J.D. are flat and uninspired, which drags down each of their scenes.

In fact, the J.D. character just solidifies how blandly generic Hillbilly Elegy feels. J.D. should not be the main character of the film since he is the least interesting aspect of the story. I can’t tell if it is the poor writing of the character or the lackluster performances by Gabriel Basso and Owen Asztalos, as adult and young J.D., respectively, that make him so blah. It’s probably failures on both ends – on top of the fact that his arc is in no way compelling.

While there is merit to this story, the focus of Hillbilly Elegy is misplaced. Glenn Close makes her scenes emotional and engaging, but the rest of the movie is either over-the-top or bland. It is a worthy experience, but other than Close, I wouldn’t say award worthy. Grab a handful of kettle corn and judge for yourself.