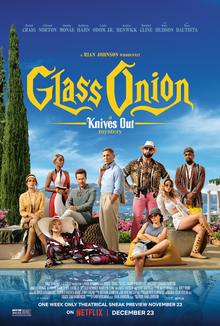 The Stream: It takes a while for the plot to kick in.

The Big Screen: Another great cast led by Daniel Craig hamming it up with Blanc’s Southern drawl and Janelle Monae bringing star quality

The Final Bill: Just as good the second time around.

Happy Thanksgiving, Streamers! I am thankful for another Benoit Blanc murder mystery opening in theaters today and dropping on Netflix in December. Yes, the world renown detective with the deep Southern drawl has been enlisted to solve another complicated murder in the sequel to Knives Out, called Glass Onion: A Knives Out Mystery. Everyone was clamoring for more Benoit Blanc, and Rian Johnson has delivered. Here’s whether this knife is sharp enough.

Once again, Rian Johnson has written and directed a murder mystery featuring Daniel Craig’s brilliantly daffy detective, Benoit Blanc. Johnson elevates the whodunnit genre with smart comedy and intricate plot machinations. There is a sprawling ensemble that includes the following: Edward Norton, Kate Hudson, Leslie Odom, Jr., Kathryn Hahn, Janelle Monae, and Dave Bautista – along with other surprises. They are a group of friends who are drawn together for a weekend getaway/murder mystery party; but, of course, when Blanc is mysteriously invited along what was supposed to be a fun time among friends reveals something more dangerous lurking beneath. Murder and crime solving hijinks ensue.

If you liked Knives Out, you will like Glass Onion. Whodunnit movies can be kind of formulaic and become stale. Rian Johnson found a way to shake up the conventions of the genre in Knives Out to make it feel fresh. The freshness that worked so well before is back again in Glass Onion. Even though murder mysteries have to hit the same beats, this plot and this ensemble have a different energy and point of view that keep the movie engaging and surprising throughout. The one quibble I have is that the first hour takes a lot of time to set up the pieces and introduce the characters. It’s not slow per se, because it’s still cleverly written, but the plot takes a while to kick in.

As for the cast, Rian Johnson and Daniel Craig have found a funny and compelling character in Benoit Blanc, which makes the centerpiece of these movies very entertaining. Craig has both the necessary gravitas for a believable crime-solver, but he’s just off-kilter enough to be silly without being ridiculous. I’ll note that Janelle Monae is a standout. She gets to play both her poise and her humor. I know that Janelle has been good in other movies like Moonlight and Hidden Figures, but I forget that she has real movie star presence on the big screen. The remainder of the ensemble have good interplay and funny quirks that make each scene pop. Edward Norton is always fun in comedies and Kate Hudson has perfected ditzy without being a caricature.

Side note: The costumes throughout are great and perfectly enhance each character. There is one costume reveal of a certain character that is so funny maybe only cinephiles will notice.

Ultimately, Glass Onion has recaptured the fun and clever ride that Knives Out was. Daniel Craig’s Benoit Blanc is still funny with his ridiculous Southern drawl. The plot and ensemble here are engaging and the twists make the whodunnit just complicated enough to keep the audience on its toes. If you can catch it in theater this weekend, get a big box of popcorn and enjoy the return of the Knives Out universe; otherwise, make Glass Onion a number one priority when it premieres on Netflix.