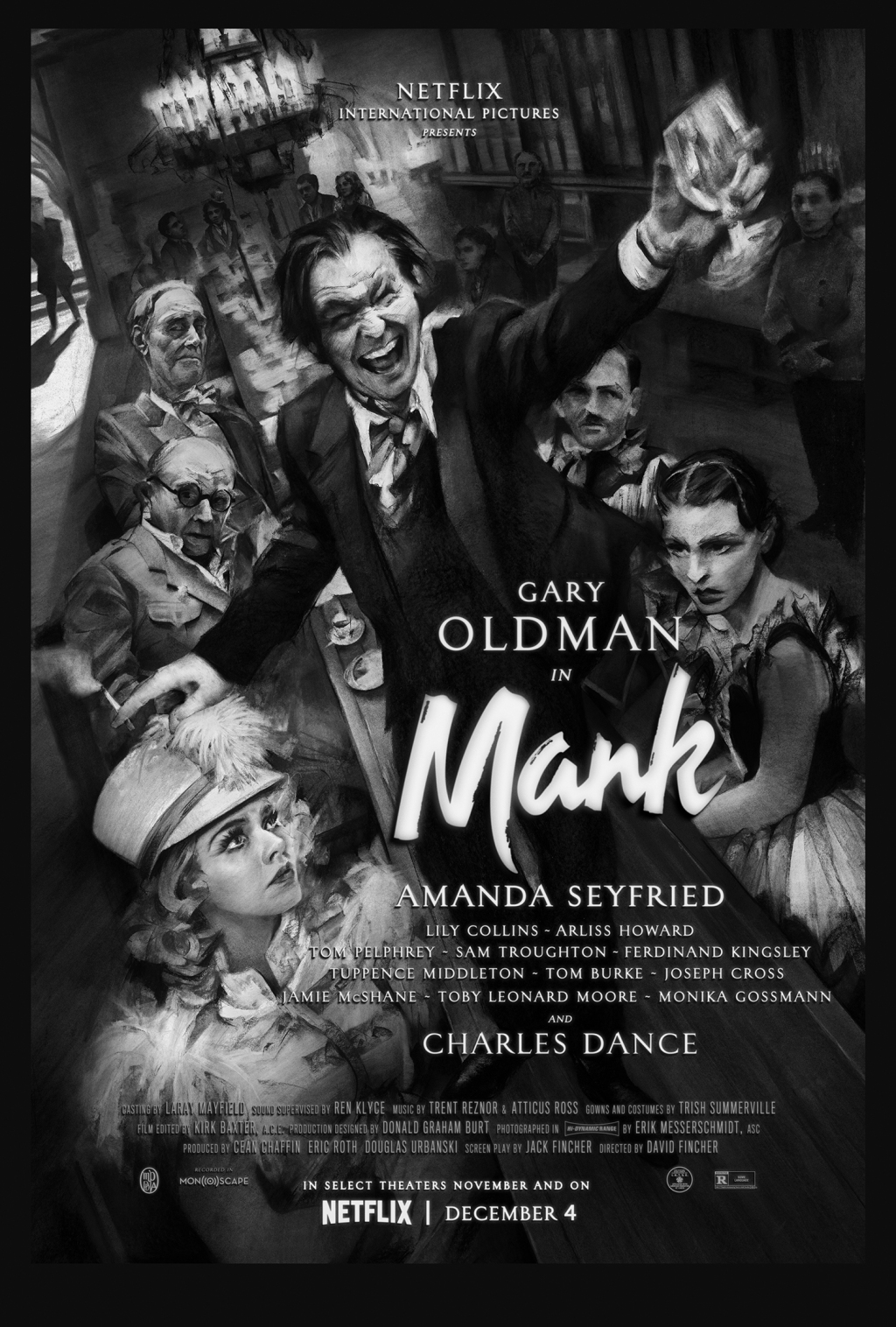 The Stream: If you’re not a film historian, you may get lost in the story.

The Final Bill: A good movie for cinephiles but not very accessible for general audiences.

David Fincher’s highly-anticipated film, Mank, premiered on Netflix at the beginning of December 2020. Full disclosure: David Fincher is probably my favorite contemporary director. His filmography is great: Gone Girl, The Girl with the Dragon Tatoo, The Social Network, The Curious Case of Benjamin Button, Fight Club, Zodiac and Se7en. I also like Citizen Kane and the history of Hollywood, so Mank should be squarely in my wheelhouse. At this point, I’ve seen Mank four times, and I have struggled since my initial viewing with reviewing it. I’m really not in any better position now to opine about the film. Here’s goes anyway.

On the most basic level, Mank is about how screenwriter, Herman J. “Mank” Mankiewicz, wrote Citizen Kane in 1941 and his experiences in 1930’s Hollywood that influenced that film. Fincher transports us back to old Hollywood starting with “Mank” scrawled across the screen in the title cards to invoke the films from the 1930’s and 40’s like Citizen Kane. The action of the film switches between the writing of Citizen Kane in 1941 and flashbacks to Mank’s burgeoning acquaintance with William Randolph Hearst in the 1930’s. Flashbacks is a major component of the structure of Citizen Kane as well. Mank is shot in luscious black and white, the sound of the film and the cadence of the speech of the actors all hearken back to that time. If you want to settle in for a film about the bygone era shot like it’s from that era, then Mank answers that call. There are iconic names that populate the movie: Hearst, Louis B. Mayer, Marion Davies, Irving G. Thalberg, and Mank’s brother, Joseph Mankiewicz, who directed All About Eve. It is all impeccably crafted including the costumes and the production design – everything that takes place in San Simeon, Hearst’s Shangri-La-like compound, is meticulous.

Gary Oldman plays Mank, who is a drunk, quick-witted and self-serving. One of my main sticking points for Mank is that Oldman is 20 years older than Mank. I understand that he was mired in alcoholism, which probably took a toll on his youth, but really – Oldman is 62, Mank is 43 in 1941 and in his thirties in the flashbacks. I can’t get over that. Oldman otherwise plays the lush and washed up screenwriter well. Amanda Seyfried is the other actor who gets a showcase. She’s delightful as Marion Davies. Seyfried exudes charm and wit that makes her endearing and does a lot to explain why Mank and Hearst want to be around her. There are also good performances by Tuppence Middelton, Arliss Howard, Lily Collins, and Charles Dance, among others, who fill out the capable and engaging ensemble. One of the best scenes in Mank takes place at 41 minutes in and is the first party scene at Hearst’s San Simeon mansion in 1933 – it is Louis B. Mayer’s birthday and all the major players are present. The cast really shines. The scene snaps with dialogue and humor and it is where the audience learns that Mank isn’t just about the writing of Citizen Kane; unfortunately, some may not make it that far.

It took seeing Mank four times for me to get some nuances that become important later in the film. I probably could have gotten it on the second viewing, but there is a lot going on that isn’t necessarily distracting but it may be difficult to determine what’s important to what the film is trying to say. For someone who is a bit of a film nerd, I appreciated watching this 2-plus hour movie about old Hollywood and the writing of what is considered the “Greatest Film Ever Made” – I was happy to watch it multiple times. I find it difficult to believe that general audiences will feel the same.

Ultimately, Mank is meticulously put together by a masterful filmmaker about an interesting piece of film history that plays best for those truly interested in that history. For others, it may be a difficult or tedious viewing experience. I think it’s worthwhile, but if you’re not a “film nerd” – just get a handful of popcorn and if you make it 41 minutes in, then fill a bowl and stay for the rest.