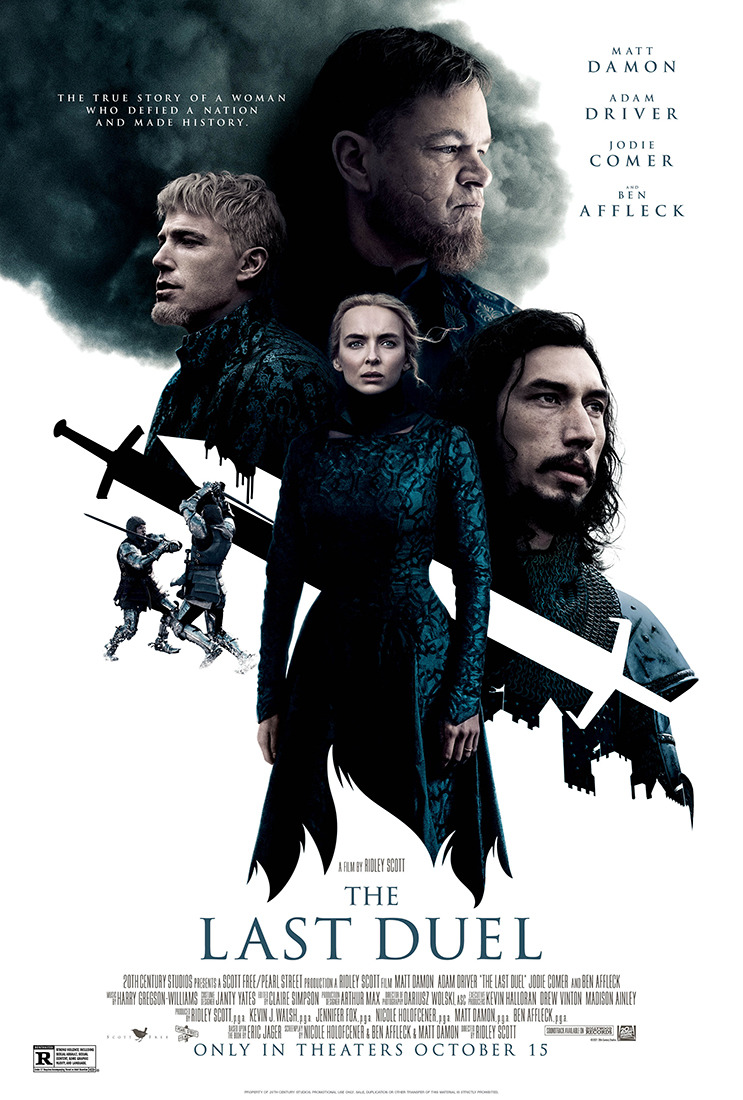 The Stream: The pace of the beginning two thirds makes it seem slow and repetitive.

The Big Screen: A powerful performance by Jodie Comer

The Final Bill: A relevant story for the 21st century

Huzzah and greetings, Streamers! A new weekend has brought the latest Ridley Scott historical epic, The Last Duel, to theaters. This unexpected offering has more than just the titular duel. The film depicts the power differential between men and women in 1300’s France as well as how those issues continue to permeate modern times. Here’s how it goes.

Based on true events, The Last Duel tells the story of Knight Jean de Carrouges (Matt Damon), the Knight’s wife, Marguerite (Jodie Comer), and his squire Jacques Le Gris (Adam Driver). Essentially, Knight Jean de Carrouges challenges his squire, Jacques Le Gris, to a duel in order to defend his wife’s honor, as she has accused Le Gris of assaulting her. Damon and Ben Affleck co-star in the film and co-wrote the screenplay with writer/director, Nicole Holofcener. The story is recounted from the different perspectives of de Carrouges, Le Gris and Marguerite in order to illuminate their differences and to emphasize Marguerite’s truth. In this way, the action of the film centers upon the drama of what led up to the “last duel” and not so much on the duel itself.

Ridley Scott has directed historical epics before like Gladiator, Kingdom of Heaven and Robin Hood. But, The Last Duel has a deeper importance considering that it’s based on true events and it reflects the little progress our society has made in dealing with sexual assault. Scott does a good job with the action aspects of the film. Some of the more dramatic elements can get kind of hokey. The story is told in relatively equal thirds, from different perspectives with clever alterations to each version. However, there is a repetitive nature that affects the overall pacing of the film, which can feel long in the middle. Thankfully, the film perks up when Marguerite takes center stage. As a side note: the movie looks good in terms of setting, production design and cinematography – it’s believably France in 1386.

Jodie Comer is great in this. Really, Marguerite is a really good role, and Comer lives up to it. Marguerite has to be demure to her husband, enticing to Le Gris, and steadfast and self-possessed in her own version. Comer does such a good job of embodying each version of Marguerite that the truth of the story is apparent when she steps into her own story. The Last Duel ends on such a high because of Comer’s powerful performance. The rest of the cast is fine, but they suffer from wonky accents and unsatisfactory dialogue. At points, the dialogue is too on-the-nose; it’s as if Damon and Affleck lifted a Facebook argument and plopped into a scene in France 1300’s. The point is well-made, but not necessarily well-executed.

Final note: when the duel does occur, it is exciting and tense. I’ll give credit to Scott’s great direction of the fight. Both Damon and Driver are totally invested in the brutality of it all. You can absolutely understand why other duels weren’t sanctioned by the king after this. Lastly, again, Comer, in the duel scene, is remarkable and it wouldn’t not be as emotional without her performance.

Ultimately, The Last Duel does a good job of telling a story from France 1300’s that is relevant today. While telling the story from three perspectives isn’t always successful, the attempt to illuminate the differences is admirable. The powerful performance by Jodie Comer makes it all worthwhile in the end. If you’re looking for a swashbuckling, heart-pounding fight to the death epic, this isn’t that thing, so don’t be fooled. For what it is, I’ll say it’s a bowl of popcorn at a Sunday matinee.