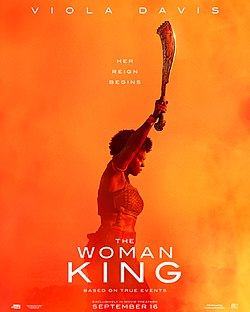 The Stream: Some predictable twists and an unnecessary romance feels tacked on

The Big Screen: A great ensemble cast that has infectious energy and tells a rousing story

The Final Bill: An action-packed, historical epic about a people whose story has gone untold for far too long

It feels like the fall movie season is beginning to take shape, Streamers! The Woman King is one of the big, anticipated epics to premiere in September. It’s historical. It’s action-packed. It’s got inspirational themes. Hollywood engineers these types of films to galvanize audiences, but they are typically led by all-male casts. As you can tell from the title, The Woman King is more female-centric. Here’s how it went for me.

Gina Prince-Bythewood (Love & Basketball, The Old Guard) directs The Woman King, which stars Viola Davis as General Nanisca, the leader of Agojie, the all-female warrior squad that protects the Dahomey kingdom in West African. The movie follows the Agojie as they prepare to fight the incoming threat of the Oyo Empire, who has been partnered with outside forces that have abducted and enslaved people in West African. There are supporting characters and subplots that run throughout the film, particularly the story of Nawi (Thuso Mbedu), a young woman who refuses to marry and so her family turns her over to become part of the Agojie. Braveheart-esque hijinks ensue.

Here’s the thing about The Woman King – this kind of story has been told many times over. The difference here is that the subject is so rarely seen in a big studio, Hollywood movie. These historical, action, war-focused epics are a dime a dozen usually. Luckily, The Woman King has a point of view that captures the strength and dignity of the Agojie. I’m going to guess you’ve never heard of them before and would not have without this movie existing. That’s at least a reason for this movie to exist. Moreover, a movie about these women and their abilities to defend their people is very compelling, even if it hits the same beats as any other historical epic.

The entire cast is great. I especially liked Sheila Atim as Amenza, the righthand woman of Nanisca, and John Boyega as King Ghezo. Atim infuses her character with a lot of heart and wit. She’s a welcome presence whenever she’s on screen. Boyega was really on his young Denzel thing throughout this movie. He has a small part, but it pays off big. Of course, Viola Davis is great; however, Nanisca is kind of a thankless role when other characters have so much more personality. Nanisca is all stoic dignity, but Viola Davis really went for all of the physicality of the character.

Other than that, it’s a war movie, so there’s action. It’s cool to see these women dominate on a battlefield. They are smart and work together like a well-oiled machine. The one detraction is an unnecessary romantic subplot. It doesn’t add much and so if it weren’t present, then the movie would be the same. I would have cut that out and given more to the other warriors, but it’s not a big gripe.

Ultimately, The Woman King is an entertaining, action-packed historical epic. While these stories are told pretty often, we rarely get to see the perspective of people like those depicted here. That is what makes The Woman King worthwhile. Beyond that, Viola Davis and the rest of the ensemble command the screen and draw in the audience. It all comes together and makes it worthy of your big box of popcorn.